Blade & Sorcery is one of the best heavy-combat games. It is time to go into a different world & beat the enemies in style. Warpfrog’s pioneering Medieval Fantasy has motivated many creators to bring out their souls & make different creative mods for this crazy game. Whether you want your game to transform into a different style or you need to add some weapons to keep things different, whatever you need we will list you different blade and sorcery mods.

The different mods for Blade and Sorcery are as follows. 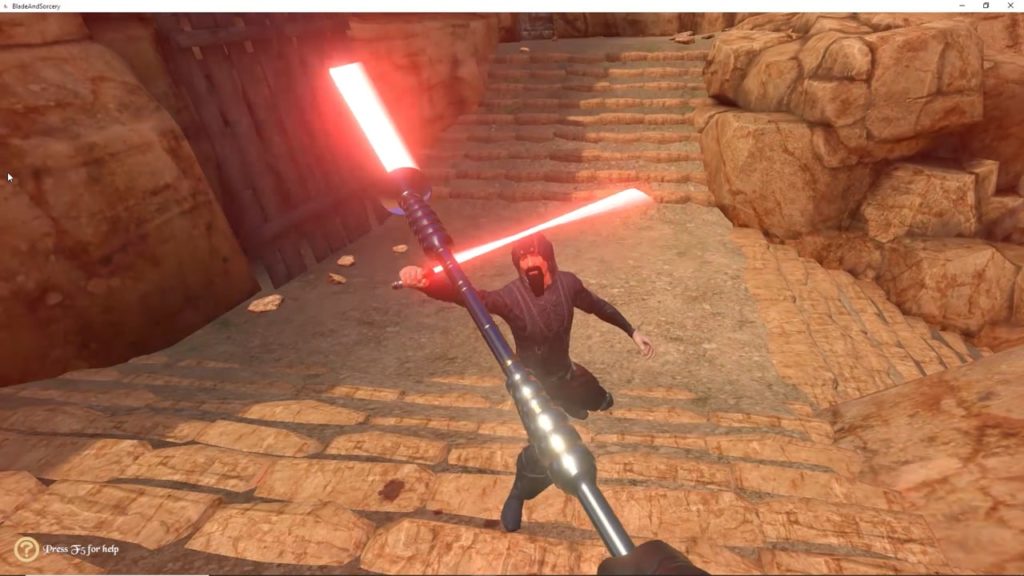 This Outer Rim mod by Kingo64 lets you transform Blade and Sorcery into the Star Wars battleground. It offers weapons such as lightsabers with Kyber crystals, & a few classic blasters. Moreover, you have few new battlegrounds set in places like Naboo & Tatooine.

If you are a Star Wars fan, then install The Outer Rim and enjoy the new experience.

These weapons are the same as they look in Bloodborne.  But these weapons can transform by mimicking the Hunter in the original game. Quite cool stuff. It will not offer as many weapons as other mods but you will get the most technically-amazing & unique arms in Blade & Sorcery.

The Mythical Weapon Pack by Sushin crafts mysterious weapons that you need to engage with in the game. You can get 20 unique weapons & they have simple effects such as causing elemental damage & draining life. Other sophisticated magic such as mind-control also come under it. Even there is a sword with a mind that is all set to fight to protect your life.

It is one of the best blade and sorcery mods and has immense popularity among the gaming community.

Magical weapons are quite cool & being Anime fans, we are quite excited when it comes to super Japanese Katana. This Siilk blade and sorcery mod brings Katana into the game along with a lot of derivative Japanese blades. This mod is all about Japanese Samurai. 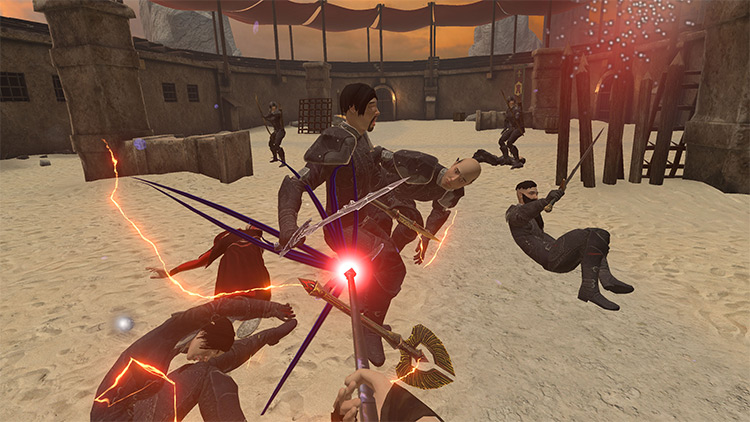 Fantasy Megapack by Sushin, has over 80 fantasy weapons coming with diverse effects to bring magic in Blade and Sorcery. The weapons in this pack are similar to the Medieval Megapack.

It has magic traits such as Shredding, causing blood loss. Or Volcanic, that has the power of fire & it causes explosions on contact.

Medieval MegaPack adds different ranges to your Blade and Sorcery arsenal, but are inclined towards completely destroying immersion. Moreover, this brilliant mod features over 80 realistic European weapons from the ancient ages. It is not just for you, but even for your enemies to wield.

The SharpAI works on the combat mechanics & improves your opponents’ AI too. SharpAI by modder Siilk has over 1900 C# lines of code to the vanilla AI. All these fancy codes provide you with the skills such as back-stepping from attacks & ding counter-attacks.

In this mod, you will not lose your weapons as easily. This mod is a must for your combat skills.

Modder Slugga’s Combat Overhaul modifies its mechanics in many ways to give you realistic battles. Some mod’s further features include increased damage on the head & torso, better ragdoll physics, etc. Additionally, it also has an ultra-realism version.

This mod by Bickle offers real Dragonborn power into your own hands with Akaviri Katanas, Daedric blades, & other weaponry found around the northern regions of Tamriel.

If you love Skyrim & want to re-experience its charm , then this mod is for you.

Mine & Sorcery by Creator SuperMassimo for Blade & Sorcery includes a wide range of blocky mining weapons, tools & TNT blocks from Mojang’s influential sandbox. Moreover, there are potions added with effects such as making you invisible or boosting the jump height.

If you’re a Minecraft lover, then you must try it out.

One of our favorite gameplay is the Death Pit Fortress & is even one of the most popular. It is a bunch of narrow walkways around a bottomless pit, & it restricts your movement and you need to be a quick thinker and be the last one standing. 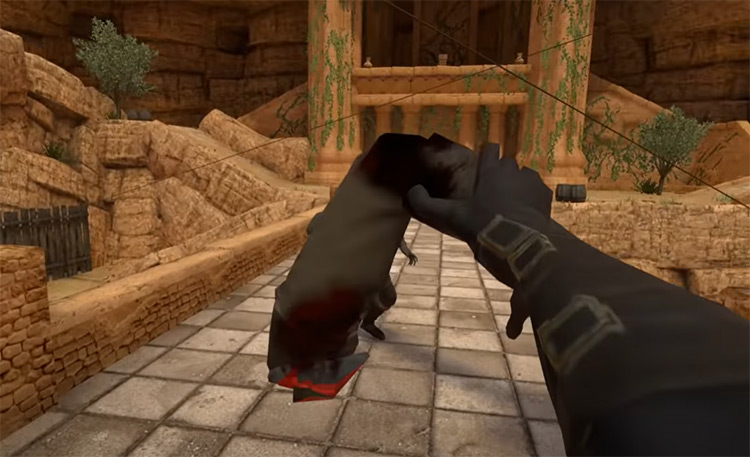 Dismembering the enemies is a basic part of combat encounters in Blade & Sorcery. And it is not hard to pull off. When you use a lightsaber, a magical axe, or a sharp katana, it is quite jarring for the limb to cling to its owner. But we need to thank the maker Kinetic as all the above dismemberment can be easily achieved with this mod.

One of the games we must have tried in VR was the basic version of Windlands. It has a couple of grappling hooks to move in an expansive different world. This concept is so soothing. And you will be thrilled to know that you can relive such an experience again in Blade & Soul’s engine all because of modder Ebediam.

Enter the Bond Wire, a kind of grappling hook and it can be attached to any surface. But be cautious of fast motion graphics & visuals.

It is not as fun as Bloodborne’s trick weapons, but this mod has different sets of the firearms & some unusual guns. This mod created by Razor offers iconic Bloodborne guns from Yharnam into your weapons in Blade & Sorcery. It also includes staples such as the Church Cannon, the Hunter’s Blunderbuss, & Ludwig’s Rifle.

But all textures & meshes are all the same as we see in the original game. 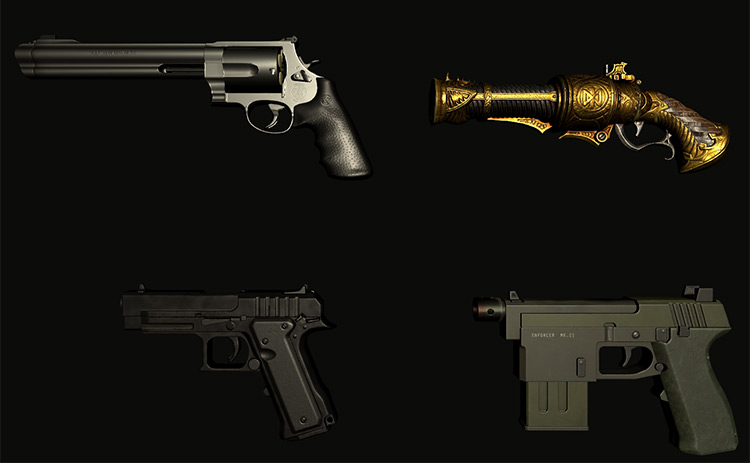 Creator SwordFisherL42 works on immersive gunplay as well as with adding guns in Blade & Sorcery.

This mod has an addition of various pistols to the game, ranging from the Drakefire Flintlock Pistol to a classic 9mm handgun. Every gun is unique in looks & power.

Also, the creator has added a few pistol-wielding enemy waves. You can go for battle & shootouts!

In this mod, SwordFisherL42’s Semi-Auto Pistols are in the Blade & Sorcery along with a realistic lock system & removable magazines. Moreover, you can use different guns in the field & have fun around.

The creator Awonya just brought the Thor experience in the Blade & Sorcery gameplay. Thor (The God Of Thunder) legendary hammer Mjolnir, is a highlight of MCU. With this mod, you can spin it around, fly with it, throw it, and even can call it back like Thor.

Woahhh! You can even charge it up with thunder & lightning & then rip enemies apart with your craze God Power. Therefore, this is really a cool in-game experience with this Mjolnir mod.

These gauntlets will let you throw beams of bright light like Robert Downey Jr. This is something quite unique and an interesting mod in Blade & Sorcery.

We all remember the game Halo with Energy Sword and we are all lit up with this crazy weapon. What if we can get a mod in Blade & Sorcery with the Energy Sword/. Let us first thank the creator Syfy Fireshot for bringing this dream weapon to this VR environment & taking gaming to the next level.

This weapon can be used only when you pick it up or else it will disappear. 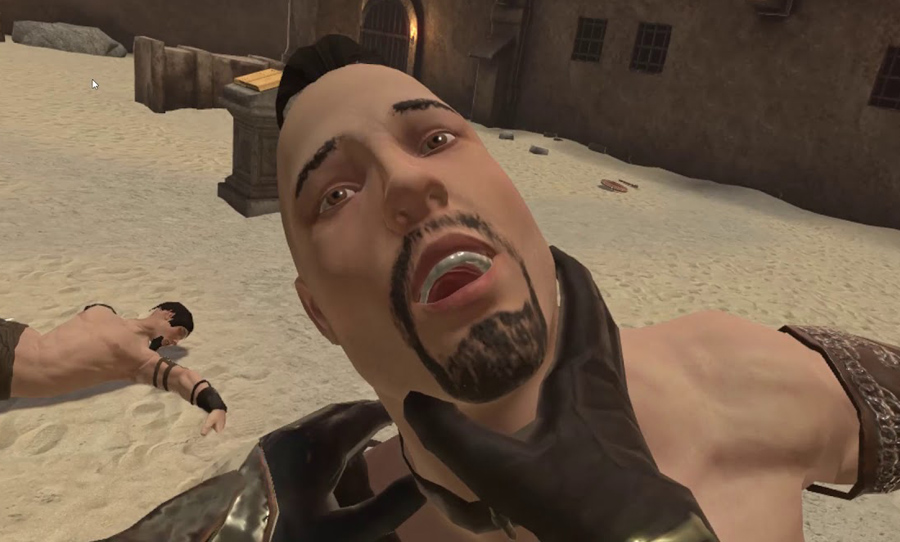 The mod Neck Snapper by JohnnyJohnnyBS is a nice mod that lets you hold your enemy’s head & snap their neck with a twist. And it is all the wrist work that executes the kill.

For immersive combat, you can also snap necks by using enough further force to the enemy’s head at the right angle.

Wrap Up The Mods!!

The best blades & sorcery mods are all here above. You need to pick the mod you want and enjoy the real-time experience. Battle it out with your enemies & bring the mods up. All in all, transform your styles and use the weapons you want. We hope your mods work well and you rip the enemies out in style.